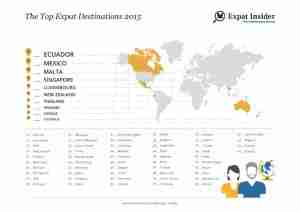 ….move to malta with www.maltaway.com to relocate yourself , your business, your family, your investments and take your way and your style with you

We’d like to share with you a detailed picture of life abroad across all continents: why people relocate, what their daily life is like, and how satisfied they are.

Expat Insider is among the biggest surveys worldwide to inquire into the living situation and happiness of expatriates. After the success of the 2014 edition, we have again asked 14,000 respondents from 195 countries and overseas territories a range of questions on life abroad.

Malta scores highest in the Working Abroad Index, mostly due to the high job satisfaction among survey respondents. Many of them are also generally happy with their career prospects (67%), work-life balance (67%) and working hours (69%). At the same time, though, 46% say that their income is now lower than it used to be back home and 38% fall into the lowest income brackets of 25,000 USD and below. Malta is also popular for its ease of settling in and makes it to fourth place in the respective index. In fact, 73% find it easy to make new friends there, and 77% feel right at home. Still, according to 8% of respondents, the friendliness towards foreign residents could be better.

Although only 17% find the local language easy to learn, 88% disagree that life is difficult without speaking it. This is probably due to the fact that Malta, as a former British colony, still uses English, alongside Maltese, as one of its official languages. As 40% of survey respondents in Malta are British, “overcoming” the language barrier is not an issue for them.

Unfortunately, the country scores rather poorly in the Travel & Transport subcategory, landing only on 39th place. Expats seem to be particularly dissatisfied with the transport infrastructure (36%). On the other hand, they are quite happy with the socializing and leisure options (79%), the quality of healthcare (80%), and the climate and weather (97%).

Malta only makes it to 42nd place in the Personal Finance Index, though, with 62% saying they are overall happy with their financial situation.

No Language Woes in Malta

Malta comes in second place among the women surveyed. One-third of women are completely satisfied with their work-life balance (global average for men and women: 17%). Outside of work, they appreciate Malta for both the quality and affordability of its medical care (fourth and fifth global rank among women).

Women also find it easy to settle in to their life in Malta. Eight in ten generally feel at home in Maltese culture and 27% think it is very easy to make local friends. They also say Malta is the easiest country to live in without speaking the local language, with 77% in complete agreement.