From a study of the European Commission – eGovernment services 2017, a new digital single market in Europe

MALTAWAY PARTNERS INTERNATIONAL ADVISORY: A PROFESSIONAL ADVISORY TO INVEST, TO DO BUSINESS AND TO LIVE IN MALTA AND FROM MALTA

Malta FinTech, a true hub of Finance and Technology from eGaming and eCommerce to eFinance and eBanking, Technology and Legal Vehicles for Cryptos, ICOs and Blockchain, solutions, services and support for the Consumer and Corporate world

The latest eGovernment benchmark report shows significant improvement on cross-border availability of digital public services and accessibility of public websites from mobile devices in EU Member states. The study also indicates a need for improvement in transparency of public services delivery and use of supporting technology like eIDs or eDocuments.

The eGovernment benchmark 2017 report reveals that the top 5 overall performers are Malta, Denmark, Sweden, Estonia and Norway. These countries lead the way forward to fulfil Europe’s ambition of creating a Digital Single Market. 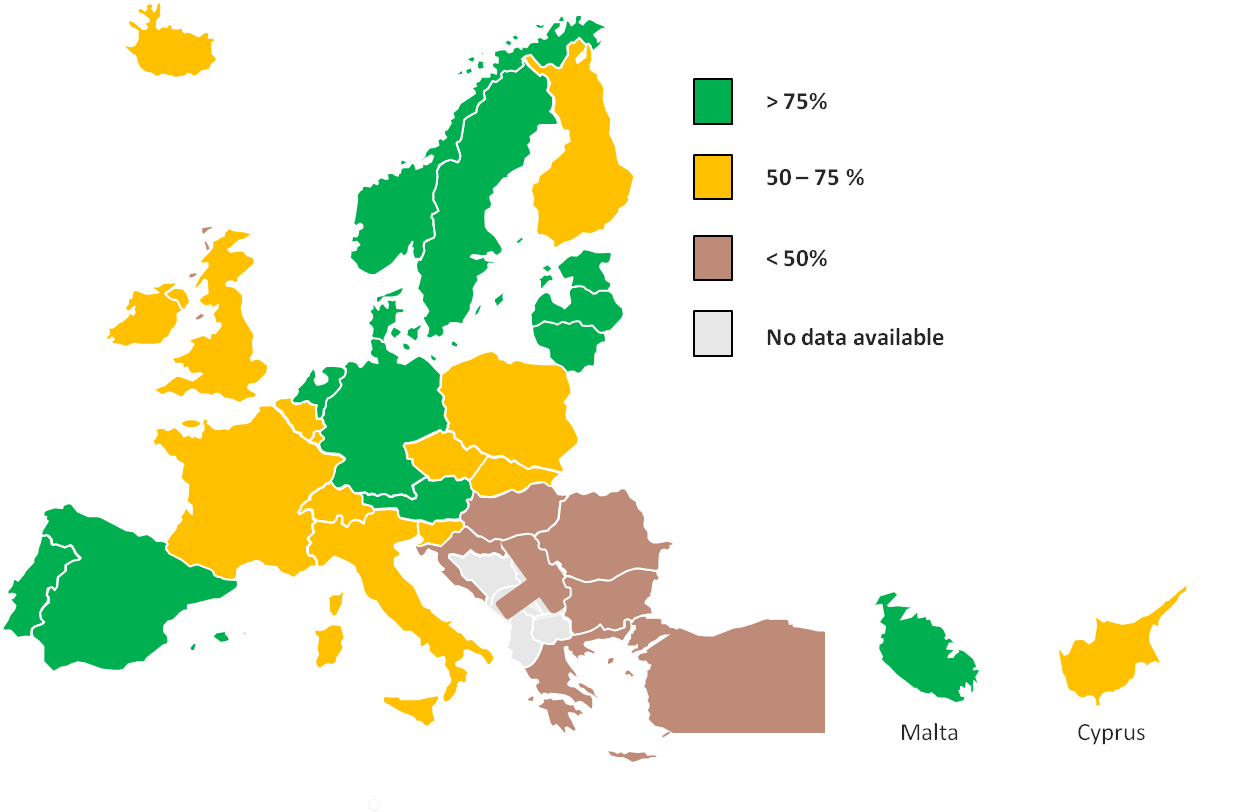 Performance is measured as an average of scores for four top-level benchmarks:

Europe appears to be getting closer to the 100%-landmark with regard to user-centricity.  However, it scores less well on the other three benchmarks, especially in terms of exploiting the potential of Key Enablers  for public services.

This is the most advanced dimension of online public services in Europe in 2016, emphasising the focus of governments to bring more public information and services online. Europe records a 12 p.p. increase in online availability of services.  The gap between worst and best performing countries is also closing (from a 52 p.p. gap to 47 p.p. in 2016).

The transparency of government organisations’ service processes and citizens’ control of personal data averages at 59% for the EU28+ in 2016. The study shows that the transparency of service delivery processes (e.g. informing users on how long the process will take, response times, etc.) is insufficient for 1 in 2 people. As previous eGovernment Benchmark studies have also indicated, this is a key barrier for users to continue their online journey. Some countries like Germany (+46 p.p. from 2012), Finland (+35 p.p. from 2012) and Iceland (+32 p.p. from 2012) have improved a lot in this area.

This dimension is essential for the Digital Single Market and records solid improvements over the years (+25% since 2012). Information and even services are becoming increasingly available to EU citizens when starting up a business or studying in another country. Results for the online availability indicator show that besides best performers Sweden and Finland (both  scoring 100%), some countries have made huge steps: Latvia (+60 p.p.) Poland (+49 p.p.) and France (+45 p.p.)  have improved their online channels for fellow Europeans. It will be interesting to observe if cross-border service delivery can continue the steep growth curve it has shown over the past years. New indicators on cross-border eID and eDocuments are in their infancy, but will be the accelerators for fully online cross-border services in the years to come.

The study reveals that the deployment of key technological enablers  (i.e. eID, eDocuments and Authentic Sources) has the most room for improvement (at 52%; EU28+). The authentic sources indicator which facilitates pre-filling of online forms, progressed slower than other indicators, with only a 3% growth since 2012. The benefits for users and public authorities are obvious (e.g. efficient, effective, timesaving) but insufficiently reaped.

Mystery shoppers, i.e. researchers that simulate the citizens’ journey through government websites and services, assess the features of multiple eGovernment services related to four life events ( i.e. collection of government services that fulfil a specific user’s need) each year. For 2016, these were: 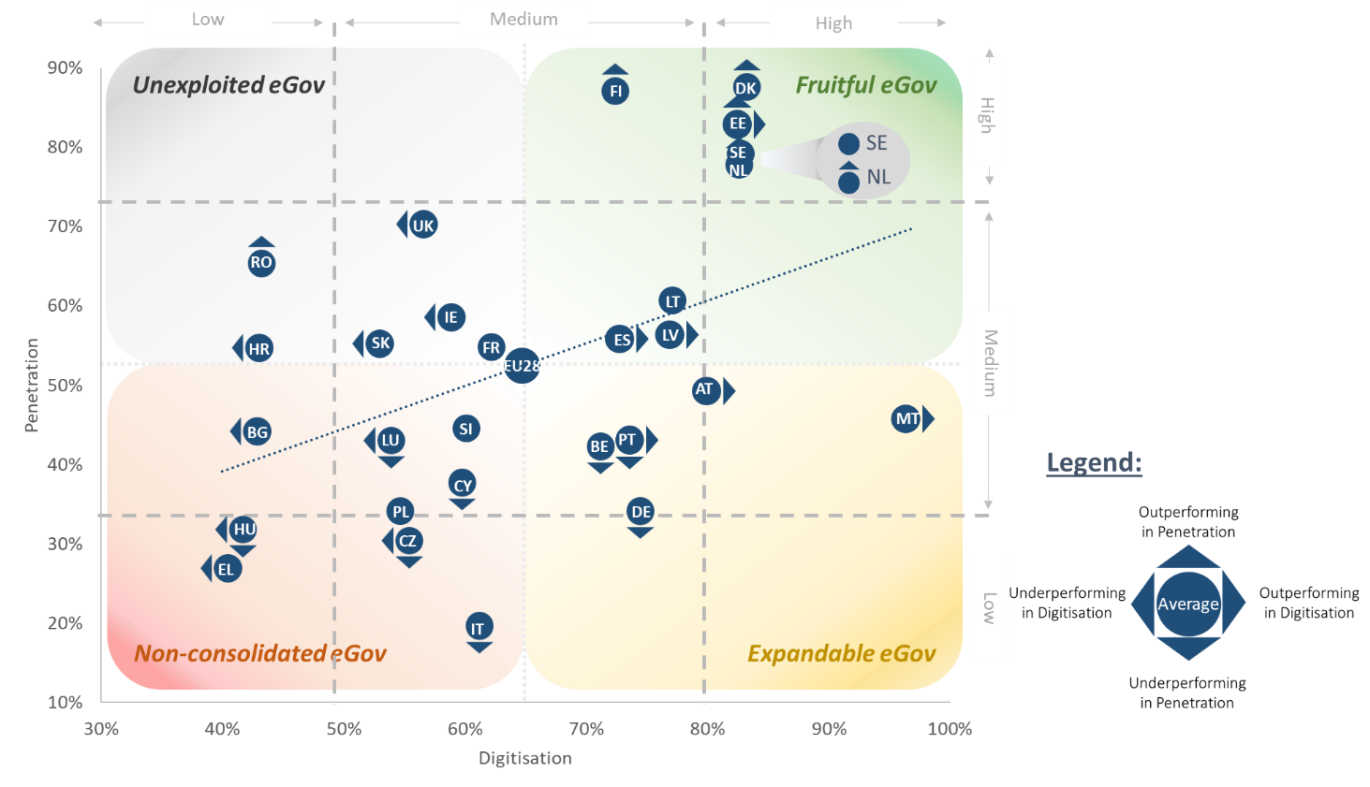 The Czech Republic, Luxembourg and Hungary show a relative performance below the European trend, both in penetration and in digitisation.

The 14th eGovernment Benchmark report is the fifth edition of the measurement made according to the eGovernment Benchmark Framework 2012-2015.  A complete measurement of all eight life events takes two years: the former four (regular business operations, moving locations, car ownership, and small claims procedure) are measured in odd years while the latter four (starting up a business, losing and finding a job, studying and family) are measured in even years. The methodology has been updated in 2016, so making comparison with previous years are possible for only some indicators.