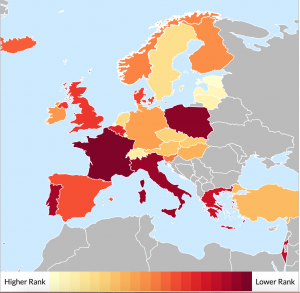 From the color intensity, you get visually grab that the worst countries in Europe are:

We are at your disposal to assist you in a professional path, from the analysis and planning phase to the delivery of the transfer to Malta or other jurisdictions of people, HNWIs, assets, corporations, with the identification of the most suitable solutions based on compliance and your specific Income and Wealth profile, through specific advisory packages.

The Transfer to the best Jurisdictions of capital, brains, energy and skills does not stop, here in Malta and from Malta, the best people and Corporations can find a professional ecosystem for the services you need for your true internationalization.

We can offer you our full advisory services:

The best tax codes in the OECD:

The worst tax codes in the OECD:

MALTA is frequently out of the radar and the global survey, nevertheless Malta is a white list country, Part of Europe and Euro system and of the Commonwealth as well

Corporate income tax (CIT) rate cuts have continued in 2019, but these rate reductions have been
less significant than the ones introduced in 2018… this is one of the tax-reducing because you can set up a business with much fewer borders friction #maltaway

Europe and global bad practices and regulation incentivizing CORPORATE DEBT instead of EQUITY, MALTA has instead a fair NID policy

IN MALTA is different having a model to avoid the bias of “advantageous debt financing model”. Malta has introduced for the fiscal year 2018 a NID model or notional interest deduction, giving a tax neutrality to the equity financing and debt financing
NID is calculated as the risk-free rate referred to the current yield to maturity on Malta government stocks with a remaining term of approximately 20 years, plus a 5% premium
https://www.maltaway.com/corporate-tax-malta-vs-usa-full-imputation-system-and-notional-interest-deduction-nid/

High-tax countries create an incentive for companies to finance investments with debt because interest payments are tax-deductible, which is usually not the case for equity costs.
This encourages global businesses to lend money internally from entities in low-tax countries to entities in high-tax countries. Tax savings in high-tax countries can exceed the increased tax paid in low-tax countries, decreasing worldwide tax liability.
To discourage such international debt shifting, many countries have implemented so-called thin-capitalization rules (thin-cap rules), which limit the amount of interest a multinational business can deduct for tax purposes. The two most common types used in practice are “safe harbor rules” and “earnings stripping rules.” Safe harbor rules restrict the amount of debt for which interest is tax-deductible by defining a debt-to-equity ratio. Interest paid on debt exceeding this set ratio is not tax-deductible. Earnings stripping rules limit the tax-deductible share of debt interest to pretax earnings.
thin-cap rules, thin-capitalization rules, debt-to-equity ratio, safe-harbor rules, debt shifting
More than half of the European countries covered have interest-to-pretax-earning limits in place. Most commonly, the limit is set at 30 percent of EBITDA (Earnings Before Interest, Taxes, Depreciation and Amortization). For instance, a parent company takes a $100 loan from its subsidiary requiring interest payments of $5. EBITDA are $10, so only $3 (30 percent of $10) of the $5 in interest paid are tax-deductible.
Some of the countries have debt-to-equity ratios in place. For instance, Turkey’s debt-to-equity ratio is 3:1. Let’s say a Turkish business takes a $100 loan from its foreign subsidiary. Its current equity amounts to $10, resulting in a debt-to-equity ratio of 10:1. The annual interest on the loan is 5 percent, or $5. Because the business’ debt-to-equity ratio is twice the limit, only half of the interest, or $2.5 of the $5, is tax-deductible.
Asset allocation and asset governance are only #independent #advisory services without any #conflictofinterest

Your assets governance (people & capital)www.maltaway.com independent international advisory & education partners the choice for the best assets allocation and of the best jurisdictions for you your business your assets #investments #wealthmanagement #monetarypolicy #investors #wealthprotection