MALTA for EU companies, a place to be

MALTA for EU companies, a place to be

A total 79 per cent of companies currently operating in Malta predict they will still be on the island in 10 years time, EY’s Malta Attractiveness Survey 2016 has found.

This was an eight per cent increase over last year’s figure.

“The ability to commit to Malta over such a time frame is considered to be the successful direct result of Malta’s consistently positive performance over a number of years in various areas,” the report says.

But EY’s report also found that business confidence in the stability and transparency of Malta’s political, legal and regulatory environment has plummeted by 15 per cent since last year. 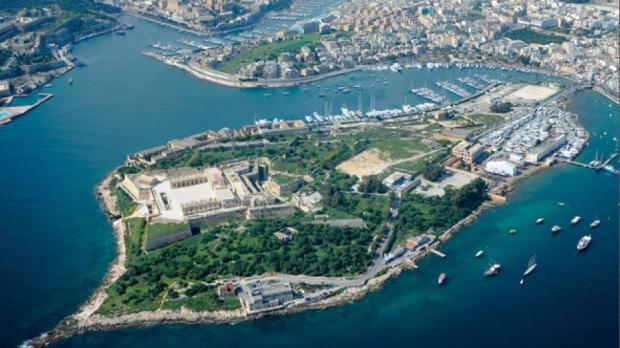 The report found that Malta’s corporate taxation structure continues to be the most attractive parameter to attract Foreign Direct Investment. The country’s social climate was also a significant draw, as was its political stability and transparency, despite the aforementioned 15 per cent drop.

On the other hand, Malta’s domestic market, its underdeveloped research & development and innovation market and transport infrastructure were the three key areas highlighted as weaknesses in attracting FDI. 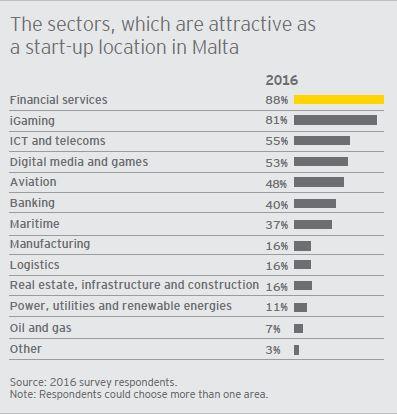 iGaming continues to be the business sector most respondents believed would dominate the local market (71 per cent), followed by ICT and telecoms (50 per cent), fund administration (46 per cent), and asset management (46 per cent).

All respondents from the banking sector believe that asset management will be the sector leader in the near future.

Even though the property and real estate sector is widely thought of as an economic driver, few foreign direct investors thought so

Even though the property and real estate sector is widely thought of as an economic driver, few foreign direct investors thought so.

This sector was ranked third-from-last (with 29 per cent of mentions), followed by pensions (28 per cent) and trust administration (23 per cent).

Although iGaming continued to top the list of sectors (an increase of 11 points over last year’s results) respondents believe it will drive Malta’s growth into the future, but was still considered to be relatively easy for the sector to leave Malta’s jurisdiction. 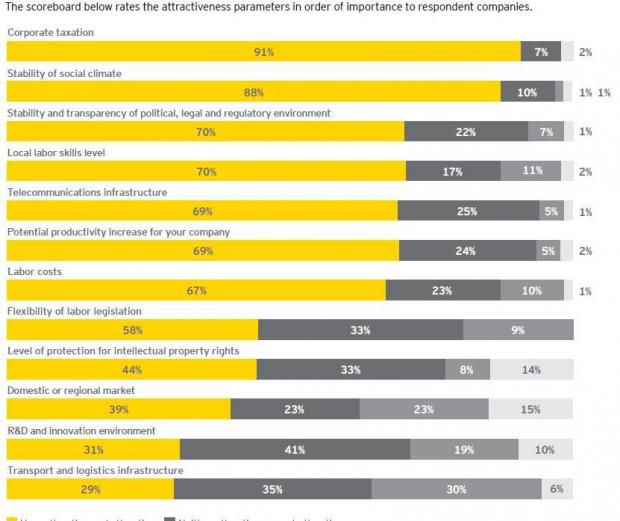 On the other hand, the regulatory stability and competitive legislative framework, as well as additional inter-linkages being built with locally-based companies providing services to such iGaming companies, make it more attractive to remain and continue to invest in Malta.

Similarly, ICT and telecoms were seen by existing investors to be important for Malta in the future, as are areas in the wider financial services field.

Malta’s experience in these areas had to be emulated in the new sectors, which had been on the radar for the last few years, including FinTech, commodities trading, logistics, other ancillary offerings for Asian e-commerce, and sustainable transport solutions. 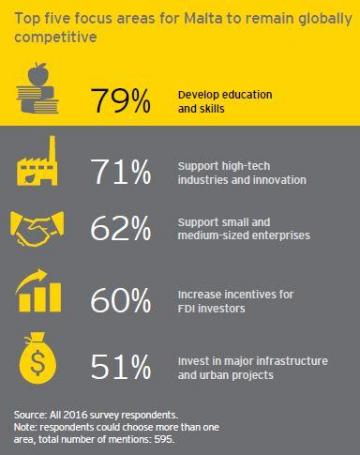 The majority of surveyed investors thought Malta would still be attractive for FDI in three years’ time. Those holding the opposite view were relatively small (four per cent).

Sixty-six per cent of the financial services and 56 per cent of manufacturing respondents believed Malta would still be an attractive destination for investment in three years’ time.

Greater uncertainty was present in other sectors, such as iGaming, telecoms and ICT with half the respondents from sectors not able to reply to this question.

Although this lack of certainty might be of concern, there was an increase of six points in the yes responses for these industries when compared to last year’s results.

Investor concerns were mainly focused on Malta’s ability to retain its fiscal independence in setting tax legislation and the availability of skilled human resources in certain industries.

From Times of Malta