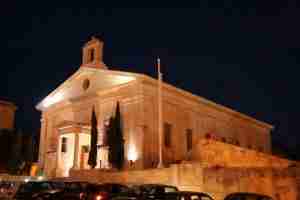 This picture above shows a wonderful Roman church, now deconsecrated, but it is also the headquarters of the Malta Stock Exchange

Be aware , open a bank account in Malta as NON-RESIDENTS , is a long, demanding and selective process. We can be your Introducer and Sponsor , first checking with you that there are the conditions to proceed without wasting valuable time

Of the 22 banks authorized to conduct business in Malta , three are owned Maltese , 19 are foreign banks .

The banking system consists of the Central Bank of Malta and the ” Malta Financial Services Authority ” ( MFSA ) , an autonomous body established in 2002 legally .

The Maltese Government has launched a legislative reform aimed at transforming the island from offshore center to financial center with a high global standard of  banking, financial and insurance services as well.

With some of the safest and most liquid banks in the eurozone, Malta is establishing itself as an international banking centre and hub for finance in the Mediterranean region. Rapidly growing and dynamic, Malta-based banks currently hold over €30 billion in deposits. Over the past decade or so, the banking sector has transformed itself from one having four retail banks serving the local population to a reputable international banking centre. This influx, which includes several leading banking groups, has added dynamism to Malta’s thriving financial services industry, and the expectation is that many other banking institutions will follow this lead.

Malta’s strong banking sector has long been the country’s backbone, supporting the growth of various other sectors. Capital buffers retained by local banks are among the highest in Europe, and Maltese banks have consistently returned solvency ratios that are almost double the EU average. Malta has seen a significant transformation in its banking sector over the last decade, from a tightly controlled publicly owned sector to one of liberalisation and foreign ownership. The country has attracted some of the most highly respected names in institutional finance to establish operations in Malta and use the country as a strategic launch pad for future expansion into Europe, Africa and the Middle East. The Tier 1 regulatory capital of the domestic banking sector sits at 11.8% (June 2014), which is almost double the required rate set by the Basel III accord.

The Malta Financial Services Authority (MFSA) is the country’s single regulator responsible for issuing licenses and the supervision of credit and financial institutions. Its high regulatory standards are modelled on EU legislation and best practice, whilst at the same time allowing for the flexibility necessary in a modern and dynamic banking environment, without imposing undue bureaucratic burdens on operators. However, as from November 2014 the European Central Bank (ECB) took over the responsibility for banking supervision at top tier level, and the Maltese banking sector is facing tougher regulatory and capital requirements emanating from the implementation of the new European Union banking Legislation (known as CRDIV/CRR), which came into force at the start of 2014.

Maltese banks remain well capitalized, and have high liquidity ratios as well as sound, well diversified portfolios. Their funding is sourced mainly from customer deposits, and their prudent business model has enabled them to emerge largely unscathed from the turmoil of the 2008 banking crisis – The World Economic Forum’s Global Competitiveness Report 2014-2015 ranked Malta amongst the top ten countries insofar as soundness of the banking system is concerned out of 144 economies and 13th for strength of auditing and reporting standards.